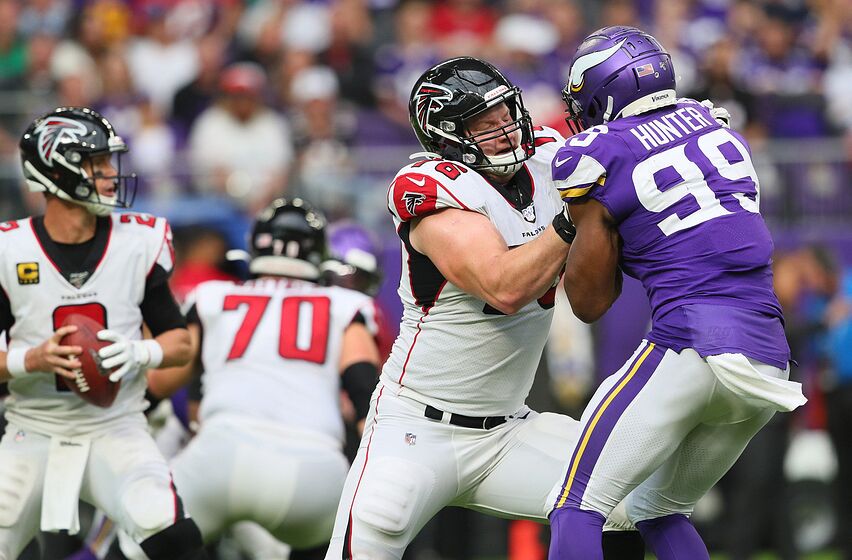 Atlanta Falcons used two first-round picks in this year, in hopes of shoring up the right side of their offensive line. Both men are still finding their way in the NFL, but Kaleb McGary and Chris Lindstrom have already proven to be warriors.

The Atlanta Falcons opened the 2019 season with a new offensive line, having replaced 3/5 of the starters. These renovations featured a new right side, manned by two first-round draft picks.

Chris Lindstrom who was selected number 14 overall in the 2019 NFL Draft, immediately won the job and was slotted in as the Atlanta Falcons right guard. He played very well in the preseason and showed some flashes of dominance.

Tragically his introduction to the NFL has come to a sudden and temporary halt. He suffered a broken left foot, landing him on injured reserve with the potential to return after eight games.

Chris Lindstrom managed to play 45 of a potential 74 snaps, before exiting his NFL debut with the injury. Impressively he played several snaps on a broken foot, according to Vaughn McClure ESPN beat writer for the Atlanta Falcons.

Even more impressive, is the fact that Lindstrom was the only player among seven linemen who played regular snaps, to not allow pressure on Matt Ryan. Chris Lindstrom will be missed until he returns late this season. He has already proved that he is tougher than a two-dollar steak.

Kaleb McGary was the Atlanta Falcons second first-round pick in this year’s draft. The right tackle was acquired when the team traded their second and third-round picks, to move up to number 31 overall.

It was announced that Kaleb McGary needed to undergo a minor heart procedure on July 31. This caused him to miss the team’s first four preseason games. Initially, McGary was thought to be lost for six to eight weeks. Yet 30 days later, he miraculously started and played well in the team’s final preseason tilt.

Kaleb McGary was the team’s opening game starter at right tackle, allowing the Atlanta Falcons to become the first NFL team to start five first-round picks on the offensive line. He was pulled after the 43 snaps due to fatigue, but he held his own against several Minnesota pass rushers.

Week two saw Kaleb McGary return to the starting lineup, and unfortunately sustain a knee injury. McGary was carted off and Atlanta Falcons fans feared the worse. They feared that both first rounds picks and the entire right side of the offensive line would be lost for an extended period of time due to injury.

However, like a scene from the WWE, McGary returned to the field and reentered the football game. It was truly amazing, as I don’t recall ever seeing a player ride off the field in a cart, and later return to play. It was a monumental display of toughness and perseverance.

#Falcons o-lineman Kaleb McGary is on the sideline with his helmet on. Didn't see that coming after being carted off with a knee injury.

Fortunately for the Atlanta Falcons, Kaleb McGary sustained no structural damage to his knee and is cleared to start against the Indianapolis Colts. Even as a rookie, he offers more as a pass blocker and a run road grader than veteran Ty Sambrailo.

Chris Lindstrom and Kaleb McGary both have a lot of growth and maturity to undergo, in order to be top-notch NFL linemen. However, they have already passed one critical test.

On a team that has been criticized in recent years as a finesse team that lacks toughness, Chris Lindstrom and Kaleb McGary add a ton of the critical element to the Atlanta Falcons football team. The two men are true warriors that will man the right side of the Atlanta Falcons offensive line, for many years to come.