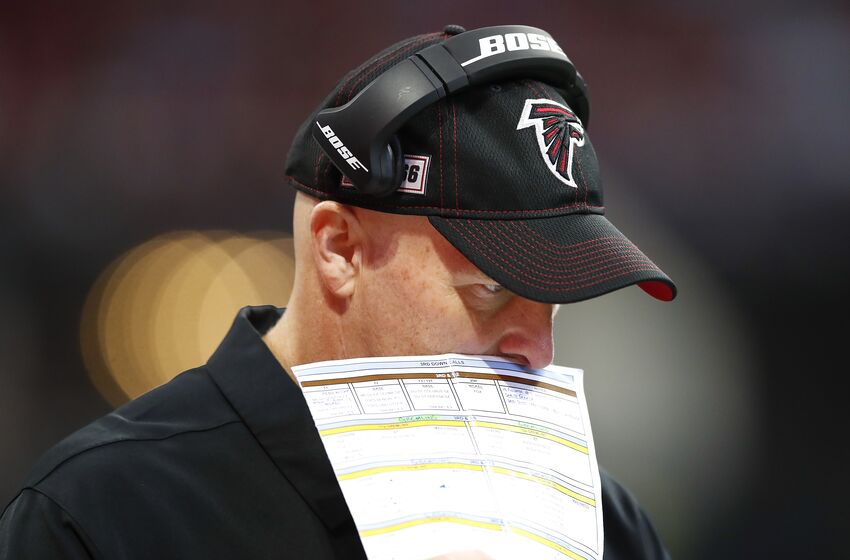 The Atlanta Falcons are amid a mini resurgence after winning two games in a row. against the New Orleans Saints and Carolina Panthers. With the two wins, the question of Dan Quinn’s future must be reconsidered.

When the Atlanta Falcons started the season 1-7, it was assumed Dan Quinn would be a goner by the Falcons bye week. Well, the bye week came in and went with Quinn still holding the title of Falcons Head Coach. Now, two weeks removed from the 1-7 start, the Falcons have won two games against better opponents. The Falcons’ success is beginning to make some fans think Quinn will be brought back for next season.

Since Dan Quinn was named the Atlanta Falcons head coach in 2015, the Falcons have made the playoffs just twice. The last time being in 2017, when the Falcons lost to the Eagles in the NFC Divisional round. Since their last playoff game, the Falcons have been an utter disappointment. Dan Quinn, the coach, seems to fit the pattern of the last two seasons rather than the coach who took the Falcons to the Super Bowl in 2016.

This season seems to be eerily familiar to the way last season went down, the only difference being less of a roller coaster ride and more of the valleys with very little peak involved. Last season, the Falcons started the season 1-4 before fighting to get their record to 4-4. After getting out of their own hole, the Falcons went on to lose 5 straight games to fall to 4-9. With the playoffs out of reach, the Falcons would win their last three games, sullying their hopes of a high draft pick, but building momentum for the following season.

Fast forward to this season, and the Falcons start 1-1 before dropping 6 straight to fall to 1-7. Now, two wins in a row, with the Falcons at 3-7, people around Atlanta are starting to wonder if the Falcons could run the table to finish 9-7 or at the worst, 8-8. Both of those scenarios are unlikely, but the streaky nature of this Falcons team can no longer be ignored or tolerated for another season.

We all know the Falcons are better than the 4-9 or 3-7 record that they have been saddled with all season. We all know that because the Falcons won the games to improve their record and will likely do the same this season. It’s becoming the trend for these Falcons to start slow and pull themselves back up. That is a trend that can not be continued into next season.

Now, at 3-7, I don’t expect the Falcons to run the table to finish above .500 at 9-7. With the Saints, Panthers, and 49ers all on the schedule, the Falcons would have to play perfect football for the next six weeks. If the Falcons do, somehow, pull that off and get to 9-7, it’ll be hard to call for Quinn to be fired, but nonetheless, should be the call made by the Falcons.

Quinn, despite his early success with the Falcons, shouldn’t be retained for next season. This Falcons team has a small window, that may already be shut at this point, to actually compete for a Super Bowl with this core of Matt Ryan, Julio Jones, and Grady Jarrett. Bringing Quinn back will be a gamble that the Falcons can not afford to take for another season. Quinn has shown us in these past two seasons that he is not the coach to lead the Falcons back to the playoffs and Super Bowl. Instead, the Falcons should cut ties, and find a new coach to inject some new life into this team. Arthur Blank has been very loyal to Quinn through these last two seasons. Now it’s time to be loyal to the Atlanta Falcons.