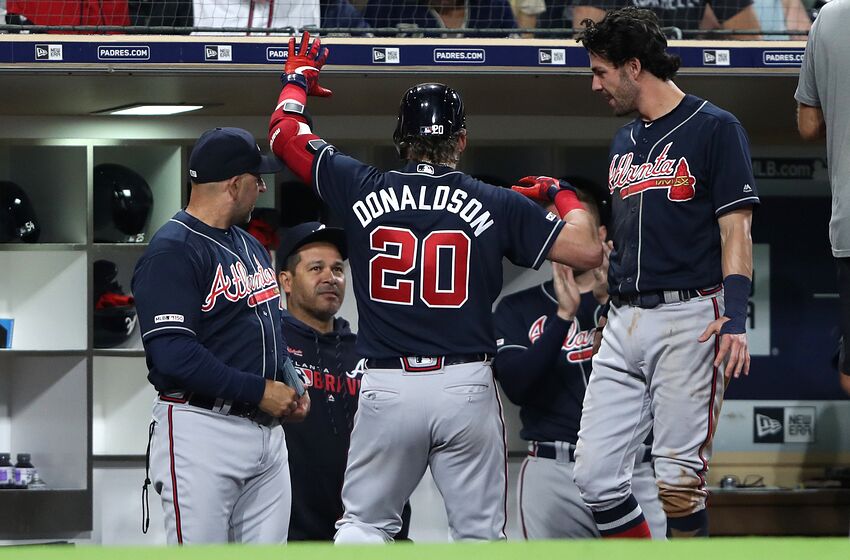 SAN DIEGO, CALIFORNIA - JULY 12: Josh Donaldson #20 is congratulatedin the dugout after hitting a solo homerun during the eighth inning of a game against the San Diego Padresat PETCO Park on July 12, 2019 in San Diego, California. (Photo by Sean M. Haffey/Getty Images)

The Atlanta Braves have been chasing Josh Donaldson all offseason, with his price rising higher and higher the longer the saga drags out. As Donaldson’s price continues to climb, are the Braves making a mistake chasing the star third baseman?

After back-to-back injury-shortened seasons, Josh Donaldson had to take a chance by betting on himself if he wanted to receive one more big payday. The former AL MVP did just that when he signed a one-year, 23 million dollar deal with the Atlanta Braves last season. At the time, it was thought to be just a one time, one-year deal with Atlanta. Instead, Donaldson had his best season since his Toronto days. Now, Donaldson was in line for a large payday.

It’s well known that Josh Donaldson has been the prize free agent left on the market after Anthony Rendon signed his deal to join the LA Angels. The Braves, Nationals, Twins, Dodgers, Rangers, Phillies, and any other team in need of a big bat in the middle of the lineup has been connected to Donaldson throughout this process. Now, halfway through January, Donaldson’s price has been bid up to four-years and 110 million. It’s been reported that the Braves and Nationals are nearing Donaldson’s demands, but nothing is known for certainty as of now. If those numbers are correct, the Braves could be making a long-term commitment to a 34-year-old third baseman. Is it the right move for the Braves?

The Atlanta Braves have put themselves in a tough position when it comes to Josh Donaldson. The Braves offense was distinctly better when Donaldson was in the middle of the lineup, behind Freddie Freeman. Without Donaldson in the lineup, it’s likely the Braves will be trotting out Nick Markakis in the cleanup spot of the order. That is a massive downgrade for the Braves offense if Donaldson doesn’t return to Atlanta.

If Donaldson does return, the Braves will likely have to commit at least four years and somewhere around 100 million dollars. Giving that much money to any player who would be 34, 35, 36, 37 in those years in risky. Add in Donaldson’s questionable injury past, and it’s a complete mystery to know what the Braves would get for those four seasons.

The alternative would be letting Donaldson walk, presumably to NL East rival, the Washington Nationals. That would leave Markakis slotted in the middle of the order. However, a platoon of Austin Riley and Johan Carmargo would take over third base in Donaldson’s absence. Riley and Carmargo are both solid pieces, but to expect those two to match Donaldson’s output would be unrealistic, even for the most optimistic Braves fans. Riley and Carmargo would serve well, but the offensive and defensive aspects would be noticeably worse with those two as the Braves’ third baseman.

The Braves have put themselves in a tough position when it comes to this Josh Donaldson saga. On one hand, the Braves are going to have to commit a lot of time and money to a player who will be on the decline by the second or third year of the deal. On the flip side, the Braves are in the rare position of being a favorite to win a World Series in the next couple of seasons. Letting Donaldson walk would put a big dent in any World Series aspirations for the Braves. Even though the Braves might be making a mistake giving Donaldson a long-term contract, it’s still better than the alternative. The Braves need to lock up Donaldson to assure the Braves remain a contender for the next few seasons.